On 25 February 1854, James Green of Aberlour signed his life away for the next 4 years.

Or, to be more exact, his father, William Green, a farmer at Ruthrie, Aberlour, did so on his behalf.

From 01 March 1853, James Green had become apprentice to William Grigor and Robert Young – the original “Grigor & Young” – in their Elgin office.

Their profession at that time was not described as “Solicitors” but as “Writers and Agents”.

Mr Green’s duties under the indenture (agreement) were significant, by modern standards.

For example, if he took time off without permission, he had to pay a penalty of two shillings and sixpence or work two days for each one day off.

Other requirements included that he:

The full terms of the contract are set out at the foot of this article. 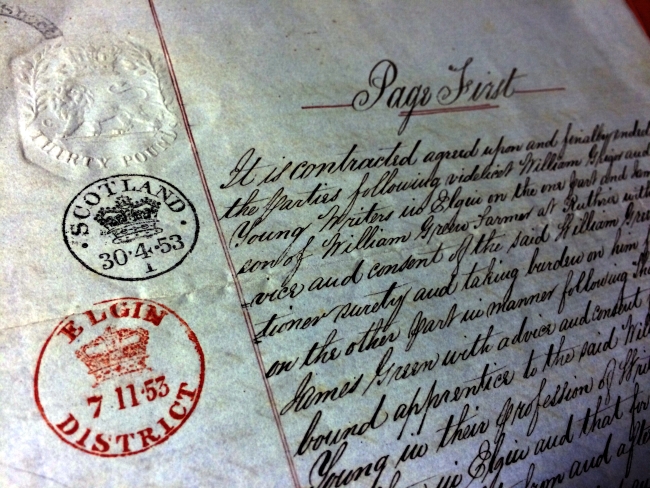 It appears that James Green completed his apprenticeship successfully. The document contains a short note or docquet towards the foot of the second page of the document:

“The within designed James Green, having faithfully honestly and diligently and much to our satisfaction, implemented his part of the foregoing indenture, the same is discharged by us at Elgin on the Twelfth day of February in the year one thousand eight hundred and fifty eight.

The contract in full

Indenture between William Grigor and Robert Young, Writers in Elgin, and James Green (1854)

‘It is contracted agreed upon and finally ended between the parties following videlicet William Grigor and Robert Young Writers in Elgin on the one part and James Green lawful son of William Green farmer at Ruthrie with the special advice and consent of the said William Green his father as cautioner surety and taking burden on him for the said James Green on the other part in manner following that is to say the said James Green with advice and consent aforesaid hereby becomes bound apprentice to the said William Grigor and Robert Young in their profession of Writers and Agents as practised by them in Elgin and that for the space of four years full and complete from and after the first day of March in the year Eighteen hundred and fifty three which is hereby declared to have been the term of his entry to the said apprenticeship notwithstanding the date hereof. During which space the said James Green and his said cautioner find and oblige themselves conjunctly and severally that he the said apprentice shall faithfully honestly and obediently serve his said masters when and wherever they may think proper to direct him and at all times by night and by day and not to withdraw or absent himself from his said service for any space of time whatever without liberty first asked and obtained from his said master or otherwise he shall pay two shillings and sixpence sterling or serve two days for each days absence after the expiry of this indenture to be in the option of his said masters and also that he shall not frequent company nor practice any bad or unlawful games or idle exercises which may interfere with or divert him in any way from his said masters’ service, that he shall not embezzle nor purloin his said masters’ goods or gear or others that may be committed to his charge, as also that he shall not reveal any of his said masters’ secrets or affairs nor conceal anything to their loss and prejudice when known to him, but shall in all respects promote his masters’ interest and behave and acquit himself as becomes a faithful and diligent apprentice and further the said apprentice finds and obliges himself to maintain himself in decent clothes during the period of his apprenticeship and to appear at all times dressed in a cleanly and decent manner and in a way becoming his station for the due fulfilment of all which the said William Green finds himself his heirs executors and successors as cautioner surety and full debtor for and with the said James Green for which causes and on the other part the said William Grigor and Robert Young accept of the said James Green as their apprentice and bind and oblige themselves to teach and instruct or cause to be taught learn and instructed the said James Green in the whole profession of a Writer and Agent and to do their utmost to cause him to understand the same in so far as they know and daily practice the same, or the said James Green their apprentice has capacity to uptake and conceive, and the said James Green binds and obliges himself to free relieve harmless and skaithless keep his said Cautioner and his foresaids of all cost and damage which they may sustain on the part to and through the said cautionary engagement undertaken for him and lastly both parties bind and oblige themselves and their heir executors and successors to implement fulfil and perform their respective parts of the services to each other under the penalty of thirty pounds sterling to be paid by the party failing to the party performing or willing to perform the same over and above the performance and they consent to the Registration hereof in the Books of Council and Session or others competent therein to remain for preservation and if needful that letter of a morning on six days charge and all other execution necessary may fixes herein common form as effeirs and thereto constitute their Procurators etcetera: 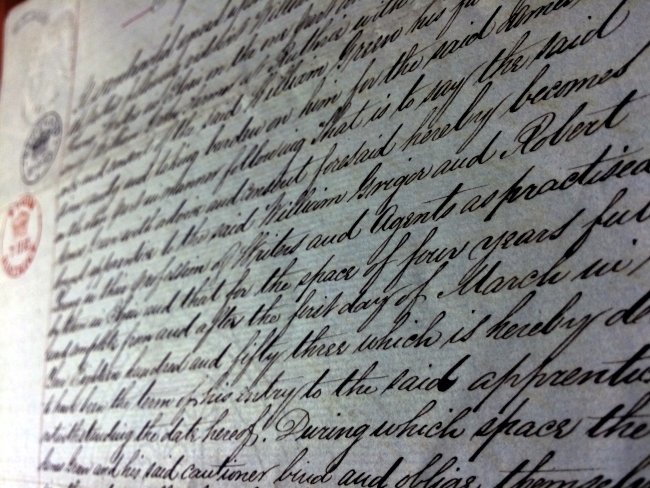 Executry and Trust Distinction for Carol
Next Post: Claims For Damage Caused By Falling Slates