The Employment Appeal Tribunal (EAT) issued a landmark decision on 04 November 2014, confirming that overtime should be included when calculating holiday pay.

Some of these employers and employees are in Moray.

The overtime and holiday pay position until now

Until now, most employers pay holiday pay based on a worker’s basic salary.

This means that no additional payments for overtime are included.

Three cases were initially brought to the Employment Tribunal to argue that their holiday pay should be based on what they actually receive and not what their basic salary is. The argument being that they received substantially less pay when on holiday than they would if they had been working.

The EAT decided that when calculating holiday pay, it should reflect basic salary as well as normal non-guaranteed overtime.

In the UK, the statutory minimum level of holidays granted to workers under the Working Time Regulations 1998 is 5.6 weeks (or 28 days). The EU Working Time Directive from which this UK law is derived, grants only 4 weeks (or 20 days).

The EAT has confirmed that overtime should be included when calculating holiday pay only for the basic 4 weeks’ leave and not the UK’s basic statutory entitlement of 5.6 weeks’ granted under the UK’s Working Time Regulations. This means that holidays over and above 20 days for now will continue to be calculated based on basic pay only.

How far back can claims go?

There were concerns from businesses that claims could potentially be backdated as far back as 1998, when the Working Time Regulations came into force.

However, the EAT has confirmed that workers cannot claim for arrears of holiday pay if there has been a gap of more than 3 months after the last incorrect payment. So, if there is a gap of 3 months or more, a worker can only claim the underpayment from the last holiday.

Some workers may be able to make a breach of contract claim which can be backdated 5 years (6 years in England & Wales) but they would have to successfully argue that the right to be paid the correct rate of holiday pay (including overtime) was a contractual right and not paying it was therefore a breach. This may be tricky to prove but will no doubt be attempted.

What does this mean for employers?

In anticipation of this decision, large companies such as John Lewis and Waitrose paid out £40m to their staff to reflect underpayments of holiday pay. The underpayments were backdated to 2006 because that is how far back their electronic records go.

However, unlike John Lewis and Waitrose, for the average employer and particularly smaller businesses where overtime is a normal part of the job, there are concerns that employers will simply not be able to afford to settle any claims received. Going forward, it is thought that payroll costs could also increase drastically as a result of the decision.

What should employers do now?

It is unlikely that the general principle of overtime being included in holiday pay will be appealed to a higher court and employers should now decide how to deal with any claims made by their workers and also how to manage the changes in the future.

If an employee wanted to make a claim for underpayment of holiday pay, they would have to make a claim to the Employment Tribunal which can be costly for both the employer and the employee. However, before submitting a claim, the parties must participate in Acas Early Conciliation. The ruling may see some employers more likely to settle claims at this stage or even before, given that backdated pay has been limited.

However, employers will need to think carefully about any changes they intend to make and how this would impact on their staff and their financial position. This is particularly the case where overtime makes up a large portion of an employee’s salary.

It is thought that the limitation on the period that claims can be backdated will be appealed to the Court of Appeal. However, it could take years before a decision is reached.

Following the ruling it was announced that a Government / Business Taskforce will be set up to “assess the possible impact” of the ruling. However, the tweet from the BIS Press Office let slip that their objective will be to look into how the impact of the ruling can be “limited”. 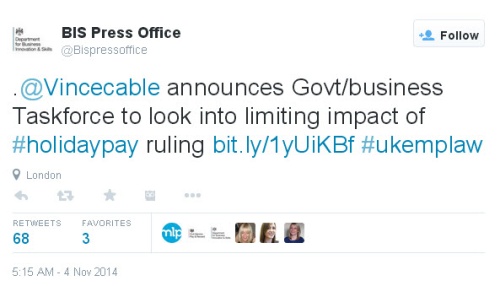 It goes without saying that this sparked an outcry from employee supporters. As did the revelation that the taskforce will consist of seven employer organisations with no unions or employee organisations.

The full impact of the ruling will not be know for some time but what is certain is that many employers will be affected in varying ways.

How to get help if you need it

Should you be concerned about any of the matters raised in this article, feel free to contact us on 01343 544077 or send us a Free Online Enquiry.

All initial enquiries are free of charge and without obligation.